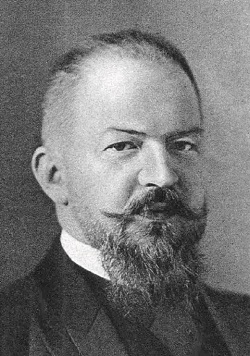 Kazimierz Twardowski (1866, Vienna – 1938, Lviv) – Polish philosopher, founder of the Lviv Philosophical School. A graduate of the Faculty of Philosophy at the University of Vienna, where he obtained a doctorate in philosophy (1892) and habilitation (1894). From 1895 until the end of his life, he lived in Lviv, conducting active pedagogical (professor of philosophy at the University of Lviv in 1895-1931) and organizational (founder and president of the Polish Philosophical Society in Lviv in 1904-1938) duties, founder and editor-in-chief ( in the years 1911-1938) of the first philosophical journal in Lviv, the “Philosophical Movement”. Twardowski educated several generations of outstanding scholars who formed the most powerful philosophical formation in the history of Lviv – the Lviv Philosophical School (known throughout the world since the 1950s under the name Lviv-Warsaw School. He was buried at the Lychakiv Cemetery in Lviv.